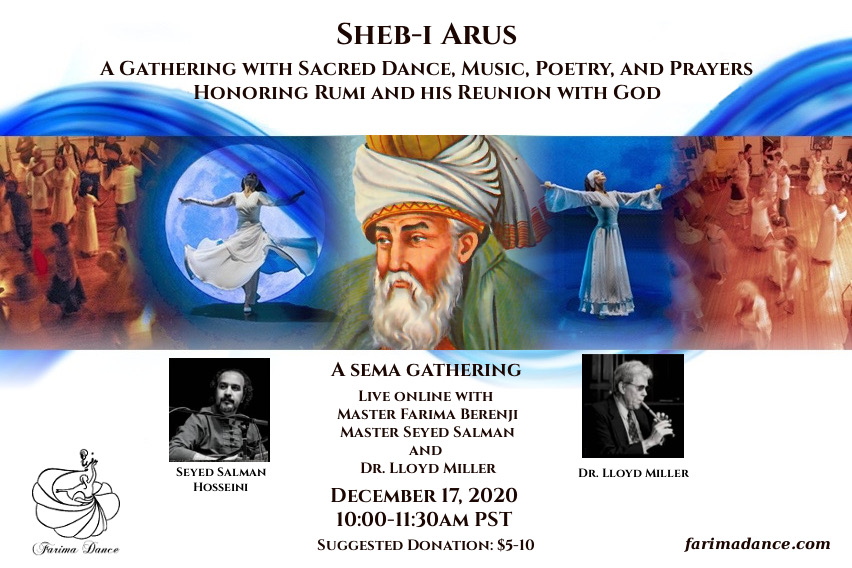 Join us to celebrate our fellowship in love and spirit with whirling dance (Sema), meditation, music, prayers, and poetry. Sheb-i Arus commemorates the death and thereby union between the Persian mystical poet Rumi and the universe.

Our ceremony will be shared multi-nationally online with Master Seyed Salman, Master Farima Berenji, and with live music by Dr. Lloyd Miller and other musicians.

Join us for sacred and mystical Sufi poetry (Farsi and English), meditation, whirling with live and recorded music, then closure with prayer and zikr.

We will whirl and journey together to celebrate love, unity, and allow the light to enter our soul. Open your heart! Listen! Turn, dance, and move in anyway that makes you feel alive!

Our gathering is not a performance. Come and join our sacred circle. You are welcome to set and feel the healing energy and prepare a poem to share as we journey together to be closer to the light. 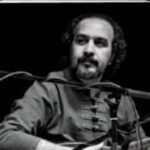 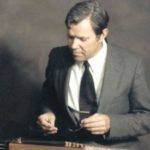 Dr. Lloyd Miller received his PhD in Persian Language and Literature from the University of Utah after spending seven years living in Iran where he had a weekly prime time television program titled “Kurosh Ali Khan va dastan”. His program featured musicians and other artists from around the world. Lloyd was urged to leave Iran during the revolution in the late 70s, though he had never planned to leave. An expert in world music including American jazz, Lloyd has made numerous recordings. The most popular being “Oriental Jazz” first released in 1968 and recently re-released by Vinyl Me Please selling thousands of copies worldwide. A film about Lloyd’s extraordinary life, including 6 years in Europe as a jazzman and university student where he played with some of the most well-known musicians of the time, is soon to be released. Titled “” the film will be screened in Finland October 25 at the World Music Expo. It was in Paris that Lloyd met Dr. Daryush Safvat who became his lifelong mentor and who taught Lloyd the importance and significance of Persian classical music. Founder of Eastern Arts, with the blessing of Dr. Safvat, Lloyd has taught music, philosophy, history, dance and culture to thousands of students at various universities for over 40 years. Read more…
+ Google Calendar+ iCal Export